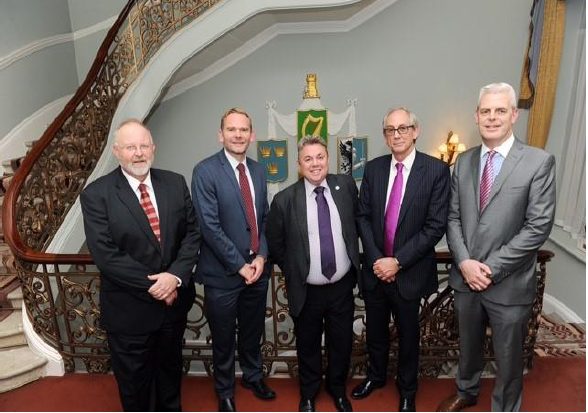 Digital Construction Week was officially opened by Kevin Rudden, President of The Association of Consulting Engineers of Ireland, in the Irish Embassy in London on Tuesday 20th October 2015.
In his opening address Kevin presented the key drivers behind Ireland’s transition over the past 5 years and highlighted the importance of leadership in Ireland’s transition as well as the breadth of leadership required from across the industry. Kevin linked Ireland's BIM evolution with Ireland's position as the number one worldwide location for US foreign direct investment (FDI), with more than $277 billion invested in Ireland since 1990. "The United States have been the world’s earliest adopters of BIM and in recent years Apple, Microsoft, Google, Amazon and Intel have demanded BIM on their Irish developments as have the US Pharmaceutical giants Pfizer and Merck"

CIC BIM Vision
“The CIC embraces a BIM enabled world. CIC actively encourages the Irish Construction and Built Environment Sector to continue to take full advantage of current and emerging information and communication technologies to remain at the forefront of the industry in Europe. The CIC views BS1192 PAS1192 and BS8536 as important routes towards standardised BIM implementation.”
David Philp, Head of BIM for the UK Government’s BIM Task Group and Dr. David Hancock, Head of Construction for the UK Government Construction Team within the Cabinet Office also spoke at the event.