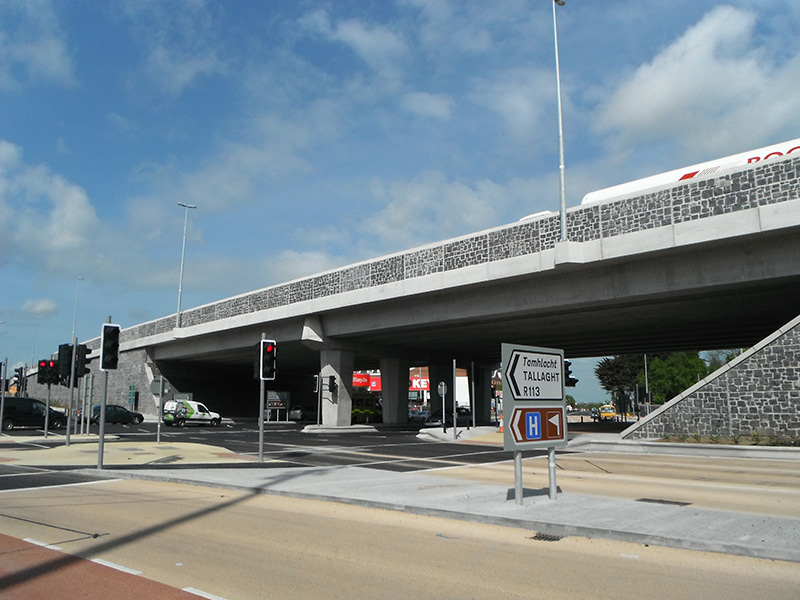 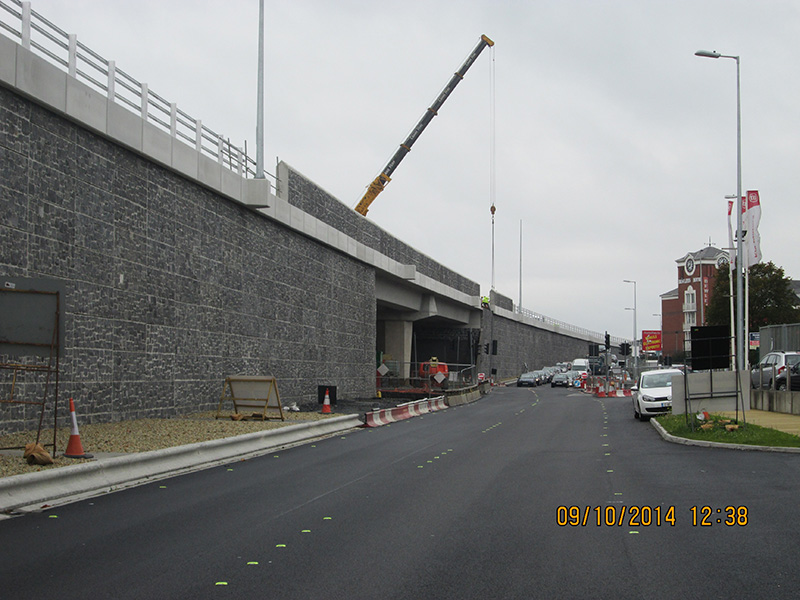 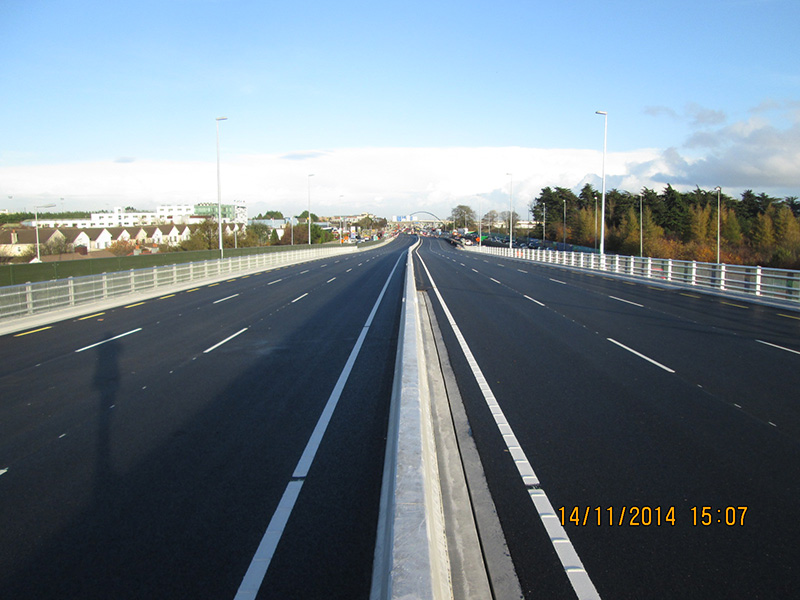 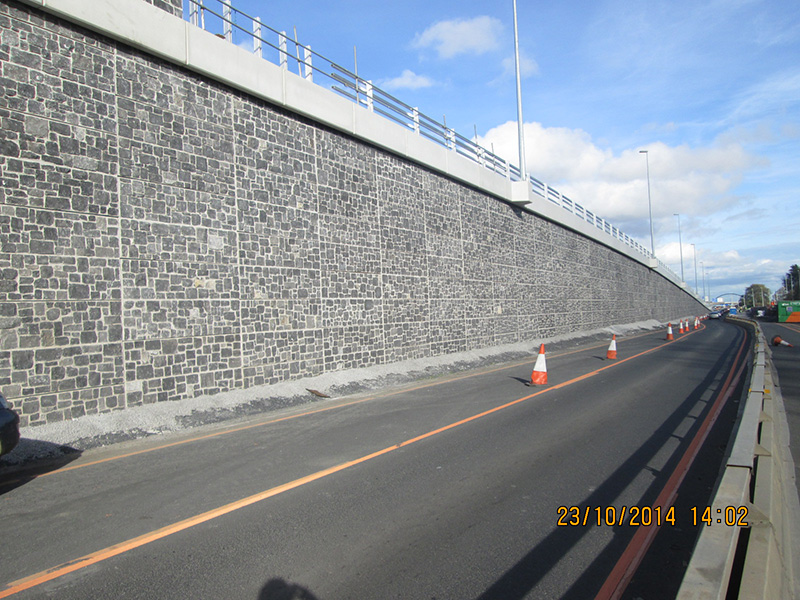 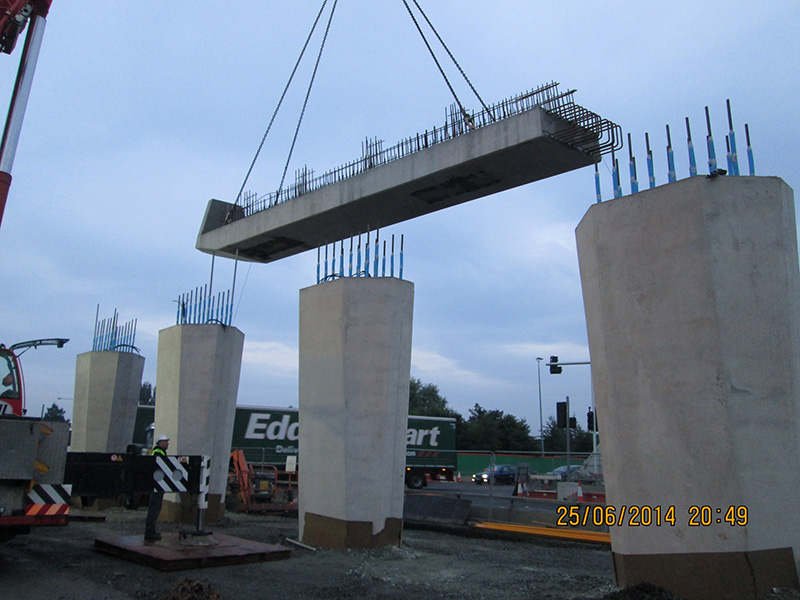 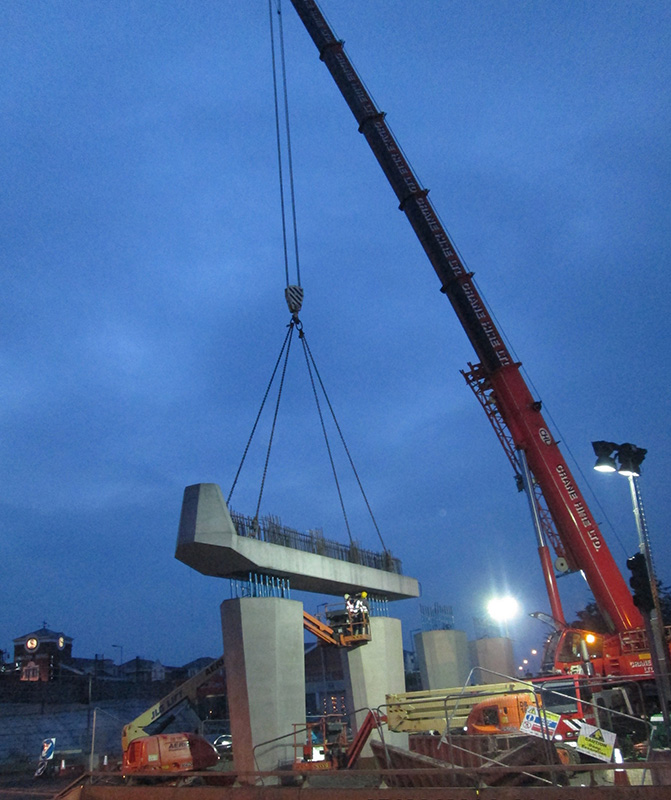 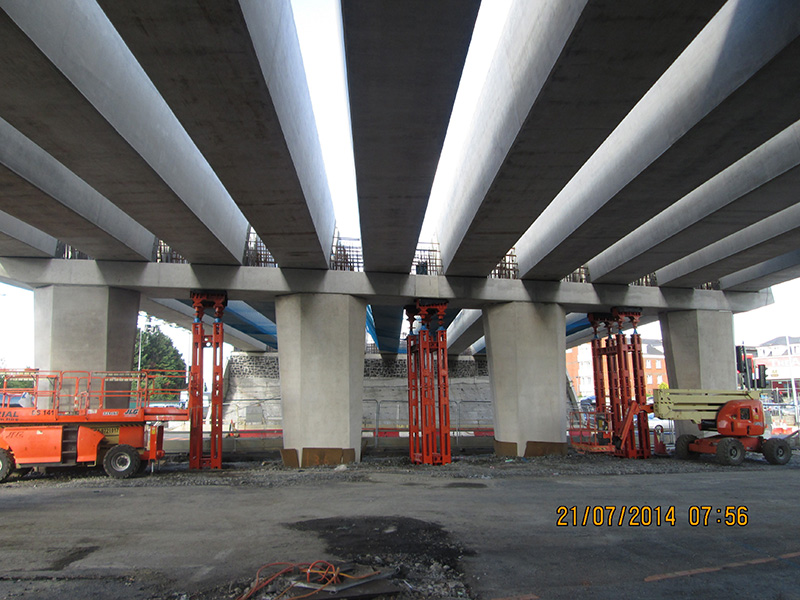 
This project comprises the grade-separated improvement works to carry vehicular traffic on the N7 Naas Road over the R113 Belgard Road/Fonthill Road South at Newlands Cross, Dublin.  It consists of a 6-lane, two-span precast concrete beam and slab deck structure made integral at the piers and abutments, and reinforced earth approach embankment structures, with the bridge parapets comprising concrete H4a types, together with all other ancillary works.  The bridge spans from face of abutment to face of pier are both 31.85m and the precast beams used are W13’s.  The new bridge is designed to span the Metro West Corridor which is to be constructed at a later date and which is to run along the east side of the R113.

The project is a component section of the N11 Arklow/Rathnew PPP Contract which also provides for 16km of dual carriageway between Arklow and Rathnew, Co. Wicklow, upgrade and maintenance works to the existing Gorey to Arklow and Arklow bypass and a motorway service area at Gorey, Co. Wexford.

The design process for this project has considered all social, environmental and economic impacts.  From a general overview, the completed project will significantly minimise traffic disruption at this renowned hotspot, thereby improving journey times and in turn providing economic benefits not only for local businesses in south and west Dublin but nationwide.  It has for instance been well reported in the media that the construction of this flyover has eliminated the final traffic-lit junction on a road journey from either Cork or Limerick to Belfast.  Furthermore enhanced safety benefits for pedestrian traffic have been introduced as part of the scheme in the form of cycle and bus lanes and pedestrian crossings.

Of particular note was the approach adopted for the design and construction of the random-rubble limestone-clad approach walls and abutment to the structure, which is a feature that is sympathetic to the locality.  The design developed in agreement with the National Roads Authority (NRA) consisted of precast concrete reinforced earth units cast with limestone facing, whereby these pre-formed items could be installed with significantly reduced safety risks for site manpower and road users, as well as associated programme benefits which has enabled opening of the bridge to traffic some 2 ½ months ahead of schedule.

The pier crosshead beam for this structure was precast, which needed to be designed and constructed in two pieces due to craneage weight limitations.  This form of construction was used to minimise traffic disruption and reduce health & safety risks to staff, who would otherwise have been carrying out time consuming work in a heavily trafficked environment.  This posed a number of technical difficulties due to its design, geometry and construction.  From a design perspective the need to comply with the stringent 0.1mm crack width limits imposed by the Irish National Annex and the design of the post-tensioned connection between the in-situ pier and precast crosshead proved challenging (see attached drawings illustrating the details of the post-tensioned connection).  The crack width was only an issue in the temporary situation and was overcome by the introduction of temporary propping prior to placement of the remainder of the in-situ concrete pier diaphragm and deck.  Geometrically the shape of the crosshead was far from standard and the end profile, while aesthetically pleasing, proved difficult to detail and required 3D techniques to resolve accurately.  Forming the post-tensioned connection between the piers and crosshead required a high degree of accuracy both in detailing and construction.  This is best illustrated in the photographs attached.  The need to have the reinforcement coming out of the piers completely vertical and positioned and aligned to match up with the formed opes in the precast crosshead required 3D coordination and a high degree of construction control.  Using an in-situ concrete crosshead would have resulted in an easier construction method where the starter reinforcement cast with the pier columns could be anchored into the in-situ crosshead, however the negative programme implications and increased temporary works dictated against this option.

The construction of the bridge structure has maximised both sustainability and safety as far as practicable through the provision of a simple, durable structure to minimise maintenance requirements.  Sustainability features of note included the use of 50% ground-granulated blast furnace slag (GGBS) cement replacement in all concrete used, which is standard practice within our organisation, while the use of precast construction and reinforced earth techniques allowed for the minimisation of waste.  From a safety viewpoint, the use of precast concrete for the main span beams, pier crosshead and H4a parapets offered significant benefits, enabling a quick installation turnaround and minimised traffic disruption, as well as greatly reducing the amount of temporary works required for alternative options.

The precast beams used for this bridge were W13’s supplied by Shay Murtagh.  This particular geometry offers benefits over the more common U beam equivalent, in that W beams are capable of spanning greater distances for the same structural depth of a U beam.  Such beams, which were originally developed in 2005 and used on the Kinsale Road Flyover, are not readily available from all precast suppliers.  Consequently the NRA required certain assurances that the design and installation met all their requirements including those of the Eurocodes before granting approval for their use.  To get such approval a design report was prepared and issued to the NRA.  This report addressed aspects such as bending, shear (particularly punching shear in the beam flange), torsional flows and reinforcement quantities as well as addressing site issues such as beam stability, temporary support loading and construction sequencing.